For Seville Grove resident Brendan Mullin, not even a stroke – a life-threatening medical emergency which alters the blood flow to the brain – could stop him from walking his daughter down the aisle on her wedding day.

The 69-year-old is one of thousands of Australians who are supported by leading in-home health and aged care provider, Silver Chain, to regain their independence after experiencing a stroke.

In coinciding with National Stroke Week, 2-8 August, Silver Chain Head of Allied Health, Kelly Gurr, wants the community to know the importance of early intervention. This includes the prevention of stroke, which is the focus of this year’s week through recognising F.A.S.T. (Face, Arms, Speech, Time) signs of stroke, and rehabilitation after a stroke.

“The biggest improvements in a client will be seen in the first six months following a stroke,” Ms Gurr said.

“It is important that treatment is sought as early as possible after hospital discharge so that the individual’s level of function and independence is maximised and they are able to live a full and rich life again.”

Following the stroke, Brendan was left with no movement on one side of his body. He also experienced memory issues and had difficulty swallowing, leaving him dependent on his wife, Margaret, for almost everything.

“I couldn’t sit up or walk without her help,” he said.

“One of my daughters was married a few months after the stroke, and I was in a wheelchair for it, so I was determined that this time I’d be able to walk.”

With help from Silver Chain physiotherapist Sam Listing, the father of four was able to fulfil his dream.

“When I started seeing Brendan, he told me his goal to walk down the aisle with his daughter in nine months’ time,” Ms Listing said.

“At first, he was not able to walk without me holding his trunk and would get tired after three metres. He and Margaret were so committed to the exercises, which usually involve strength and body awareness. His motivation and hard work are so inspiring.”

In 2020, more than 27,000 Australians experienced a stroke for the first time. It is a leading cause of disability, with almost 450,000 people around the country living with the effects of a stroke, and it accounts for about 5% of deaths.

“Thanks to Sam, I was able to walk my daughter down the aisle,” he said.

“I’ve gone from a wheelchair to walking stick, and I’ve got my confidence back.” 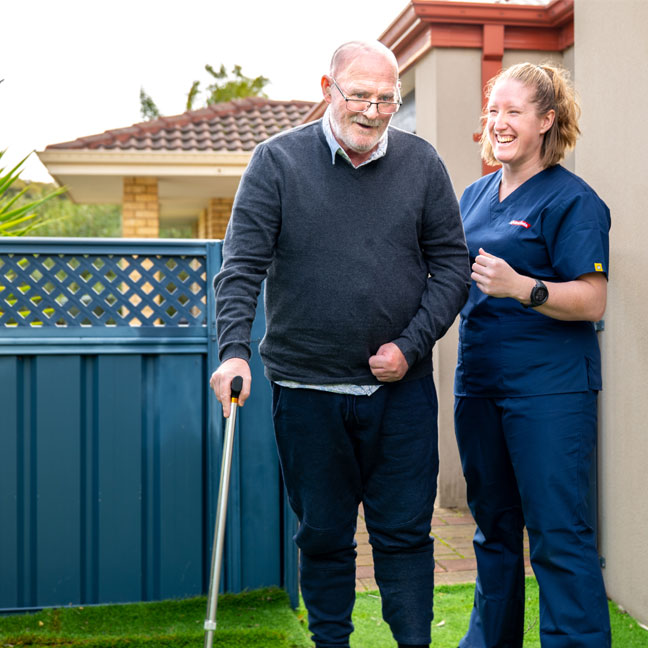