Thanks to RDNS Silverchain, little Mahlia is thriving

Mahlia is at home, and, with a little bit of help from the RDNS Silverchain, she’s thriving.

Nine days after being born at only 24 weeks in February 2020 – and weighing just 420 grams at birth – she required surgery for a perforated bowel.

It was the first of eight surgeries in her first 20 months of life, which saw her hospitalised for months at a time, while her parents Danielle and Roger and sister Lilah were forced to travel thousands of hours and kilometres to visit and care for her.

As a result of these bowel surgeries, Mahlia now experiences Short Gut Syndrome, a complex condition which sees patients unable to absorb food nutrients properly. Mahlia receives her nutrition through a central line into her chest, which must be kept clean and hygienic.

When she was well enough to return home from the Women’s and Children’s Hospital in Adelaide in February, Mahlia was referred to the RDNS Silverchain Paediatric Team.

“She was small when we met her but she’s flourishing since she’s been home,” says Tina. “She’s now crawling around happily, she’s cheeky and smiling."

The visits by Tina and her team mean that Mahlia’s family doesn’t have to drive the 45km from their home in Adelaide’s south into the Women’s and Children’s Hospital in the CBD to receive this specialised care – a gift of time and compassion that her mother Danielle is thankful for.

“Mahlia has already spent so much of her life in hospital, and now that she’s home, it’s so nice to not to spend hours on the road and in the hospital,” Danielle says.

“She’s a happy, delightful baby who we are lucky to have. To have the RDNS Silverchain provide this support at our home has helped her thrive and it has definitely helped all of us.”

“Mahlia and her family are so appreciative of what we’re doing. We’ve become close and involved in their lives. It’s a privilege to provide important clinical care to children in their homes, with their families and things around them, and see them happy and healthy.” 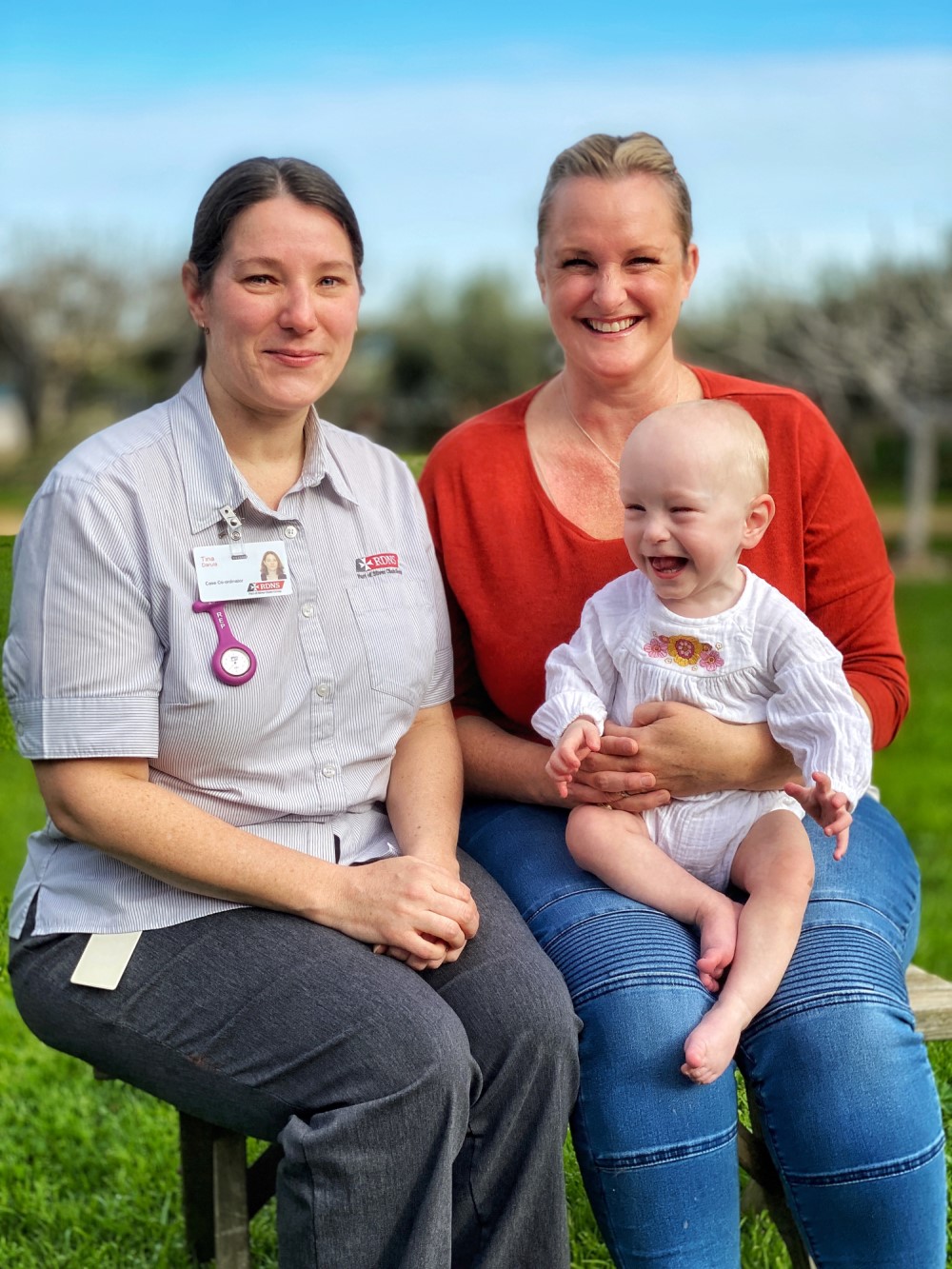 Tina Darula is a nurse with a job she describes as ‘the most rewarding thing I’ve ever done’.

She and her Paediatric Team of 12 specially trained nurses look after thousands of children, right across metropolitan Adelaide, providing expert clinical care that keeps them out of hospital and in the familiar surrounds of their homes.

Tina joined RDNS Silverchain nine years ago so she could practice her clinical skills as personally as possible.

“And, with my own family of four kids and a busy husband, I knew that the flexibility of community and in-home care would suit me better than the formal structure of a clinic or a hospital environment,” she says.

Care for children in their homes is not only more comfortable for them, it also means that their families don’t have to disrupt their lives with hospital visits or trips for treatment. And they can all stay together.

Working with hospitals after discharge, GPs, schools and child care services, Tina and her team visit hundreds of families at home every year.

“The type of care we offer is so important. It keeps the kids at home with their families and in their own surrounds where they are definitely more amenable to care. There’s less stress all ‘round.”

“So from both a clinical and care perspective, the service is a real winner.”

During COVID-19, Tina and her team have been able to continue their valuable face-to-face service.

“It’s our great privilege to go into family homes, especially when things are tough, to get to know them and provide first class clinical treatment for young children. It’s the best work I’ve ever done.”